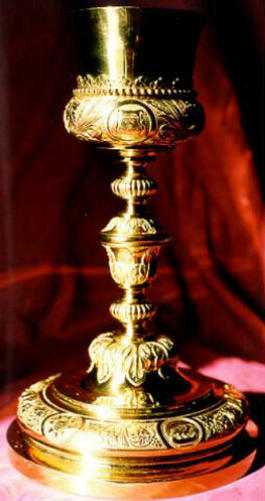 by El Greco​ | Click for Closeups
The beautiful chalice you see pictured was discovered quite by accident in the closet of an inner city rectory. At the time of its discovery it didn't appear quite as it does in this photo. The gold plating had tarnished to an ugly green color, it had dirt caked on it from years of sitting untouched, and a number of insects had found refuge in its base.

After a thorough cleaning, its true beauty began to emerge. From a strictly artistic and historical perspective, the following facts were obvious:
It was cast in sterling. The gold plating is still in remarkably good shape; it may have been replated at some point in its history.  Its baroque style was a popular one with Roman Catholic chalices from the 17th to the early 20th centuries. Its wide base and small tulip shaped cup, combined with a narrow stem, points to a Spanish influence. This Spanish style is further evident in the use of symbols of our Lord's Passion,  such as the Holy Nails and Veronica's Veil.

But of course nothing does more to confirm its Spanish origins than what was perhaps the most interesting discovery of all. Upon a most careful cleaning beneath the base, (and the removal of several dead insects), an inscription was found. It has been the custom for centuries to inscribe memorials on the bases of chalices. The idea being that the priest would see it as he raised the chalice up high over his head at the consecration during Mass. These were usually from family members and might be something similar to "remember your mother and father, pray for us" etc. This particular chalice was found to have a rather lengthy inscription in spanish, engraved in a beautiful longhand style, probably by the goldsmith who made it.

The exact wording as it appears on the base is as follows:
Para la Iglesia de Palauig.
Ofrecido por un D~vto. Eclesiastico natural del espresado Pueblo.
Ano de 1873.
​A fairly close English translation (the Spanish is somewhat archaic in style) would be:
For the church of Palauig.
Given by a devout (faithful) cleric (possibly a priest) native of  the aforementioned town.
​In the year 1873.
​Directly below the date is a monogram which appears to be a P over an M. These initials could belong to the donor, to the church (P for Palauig), or even to the goldsmith himself.

From this inscription some facts can be determined. First and foremost, Palauig is the name of a city in the Phillipines. Today there are a number of Catholic churches and the population numbers in the thousands. But in 1873 it was a somewhat remote mission outpost, with only one Catholic church. The Philipines were of course a territory of Spain. The individual who donated the chalice belonged to a native social class known as "naturales"; natives who had a somewhat higher ranking on the social ladder, yet still below that of pure blood Spaniards.

Of course the biggest mystery of all is how a 19th century chalice from an island thousands of miles away, ended up in the inner city rectory where it was found? It might possibly have been a gift from a passing priest who brought it with him on a fundraising visit to America. Another theory proposed is that the area around Palauig was the scene of fierce fighting between the Allies and the Japanese during WWII. It was common practice for Catholic GIs to bring home souvenirs. Many rescued and brought back sacred objects from bombed and looted churches; usually to be donated to their local parish upon their return home.

At any rate, the most important thing is that this beautiful yet humble gift was rescued yet again from an uncertain fate. Today it serves to educate a younger generation about their Catholic heritage. And on certain special occasions it still fulfills its original purpose; to grace the altar during the Holy Sacrifice of the Mass.
Anyone who might be able to provide more information about the history of the city of Palauig in the Phillipines, and its possible relationship to this piece, is invited to email me at the address provided on the links page.