Following in the footsteps of a thousand years of Spanish Catholic tradition, our family home has an "oratorio". This serves as a constant reminder to all who pass that this is a Catholic household. In larger homes of wealthier families, the oratory was in reality a private chapel. Here it was possible to have private Masses said, family devotions such as the rosary, and in time of death, wakes for family members. 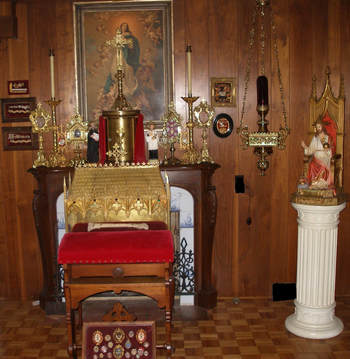 Here, a large 19th century canvas print of the Spanish artist Esteban Murillo's (1617-1682) "Inmaculada Concepcion", acts as a retablo for the altar-like setting. "La Inmaculada" has been the patroness of the maternal side of our family for the last one hundred years. In the old country, her image was on everything from a stained glass window in my mother's home, to the trademark and letterhead of her family's business. Murillo painted seventeen different versions, ingeniously using The Virgin Mary's Assumption into heaven as a means of portraying her Immaculate Conception. The most famous version hangs in the Escorial Palace in Madrid. The rest are scattered in museums throughout the world. In the United States, there is one on permanent display at the Nelson-Atkins Museum of Art in Kansas City. This chromo lithograph canvas print, originally from Spain, was rescued from an abandoned convent in Mexico. It was expertly restored by Art Accents II.

Figuring prominently to the left of the tabernacle, is the family patron, and most distinguished relative in the family tree, St. Ignatius of Loyola. This great 16th century saint founded the Society of Jesus, also known as the "Jesuits". His relic is in the reliquary directly to the left of his statue. In this particular statue he is depicted pointing to a book with the initials "A.M.D.G.", his motto. The latin words are, "Ad Majorem Dei Gloriam", or in english: "For the Greater Glory of God".
​
To the right of the tabernacle is another famous Jesuit, St. Aloysius Gonzaga. He was my mother's patron saint. In true Spanish tradition, her middle name Luisa, (the Spanish feminine of Luis, from Aloysius) was taken from her birthday, June 21, the feast of St. Aloysius. His relic is in the small, gothic reliquary directly to the right of his statue.

View a closeup of the beautiful Spanish statue of St. Ignatius, and the large, gold plated bronze reliquary containing his relic.
​
The relic itself is a "first class relic", that is, it is a tiny splinter of bone taken from the saint's body. It is in a locket, usually referred to as a "theca", made of gold plated sterling filigree, and surrounded by stones. Inside, it has incredibly small, hand painted flowers. This work was almost always exclusively done by nuns, and it could take several hours to complete just a small number of relics per day.

View a detailed closeup of the relic itself.

As a matter of Catholic Church law, every relic must have a document attesting to its authenticity. These documents are called "authentics". They are drawn up shortly after the relic is made up, and must be signed by a high ranking cleric, or someone delegated to do so. As the years have passed, many older relics have been separated from their authentics, as they were rarely kept together. While these relics may have been exposed on altars, in glass display cases with many others, or even worn by priests or nuns, their documents were usually kept in some "safe" place. These places were in many cases so "safe", that they were often lost and forgotten over the course of time.
​
This particular relic still has its original authentic. It was issued and signed by the famous Cardinal Micara; once a powerful Vatican political insider who served under Popes Pius XII, John XXIII and Paul VI. It was issued in 1964.

On the far left, hanging on the wall in wooden frames, are the relics of an unidentified martyr of the Theban Legion. These early Christians died for their faith along with their leader, St. Maurice, in the year 290 A.D. They were Coptic Christians from Upper Egypt, recruited by the Roman emperor Maximian to squash an uprising by the Gauls in what is today's Switzerland. After the battle, Maurice and his Theban legionaries refused to partake in the spoils of war, and especially to offer sacrifices to the Roman gods. Instead they retreated quietly to a camp a few miles away. When Maximian heard of their actions, he ordered the beheading of every tenth man. Maurice and his men stood firm in their faith, and even refused to fight the executions. Enraged, Maximian ordered them all killed. Devotion to St. Maurice and his companions is widespread throughout France and Switzerland, and they are most revered by the Coptic Christians in Africa; especially in Ethiopia.

These particular relics are referred to as "distinguished" relics; that is because of their size. The upper frame contains part of the lower left jaw, with two of the rear molars still intact. The other teeth were probably removed for relics. The jaw itself may have been broken into sections for that purpose as well. The lower two frames include bones of the right arm; specifically the humerus (bone of the upper arm), and the ulna (lower bone of the forearm). It is exceedingly rare to find such relics outside of a religious institution such as a church or monastery. Unfortunately with the abuses following the Second Vatican Council in the early 1960's, many such treasures were disposed of as many churches, monasteries, and convents closed. These particular relics bear an abbot's seal; that of a 12th century French monastery called Sainte Sixte. They also have a more recent seal, that of a bishop, probably Canadian, as that is where they ended up some 150 years ago. They were placed in these hand carved frames around that time. For centuries, it was common practice for religious communities to send some of their treasured relics to other communities as gifts, or for safekeeping in times of civil unrest. These particular relics came into the possession of the prestigious "Galleries de Roy", of Quebec, Canada in the early 1980's. Here they remained in obscure storage for almost twenty years. I am honored to possess such treasures, and accord them the honor which eluded them for so long. This is another classic example why collectors should always be on the lookout in antique shops and flea markets, especially when travelling in older Catholic parts of the world. Hopefully other treasures like these can be rescued and restored to more fitting places of honor.
For some closer views of these relics and their hand carved frames:  <<CLICK HERE>>
​
See "The Martyrdom of St. Maurice and the Theban Legion" as done by the 16th century Spanish painter El Greco.